Not All Predictive Policing Is Created Equal-Here’s Why:

Some of this concern can be resolved by carefully explaining what predictive policing is and what it is not. Even with such careful explanation, predictive policing should be subject to high standards of accountability and openness. Society grants police extraordinary powers and anything that potentially impacts how those powers are exercised must be subject to such high standards.

Predictive policing may be used to describe a range of different data-driven policing strategies. A way to understand this range is to ask first, what is being predicted and second, what data is being used for prediction.

A crime risk factor is some measured attributes of individuals, social groups, places or neighborhoods (anything really) that is correlated with the occurrence of crime, but is itself not illegal in nature. For example, socioeconomic disadvantage (poverty) has been known to correlate with crime since at least the 1830’s. This has led many to think of poverty as somehow causally related to crime.

By contrast, crime event histories reflect past behaviors that have been recorded as a violation of the law. The process that leads to the recording of a crime is certainly imperfect, but it is subject to a set of legal standards that risk factors NEVER are.

These different pieces can be put together to arrive at a simple classification of the range of strategies that might be called predictive policing. 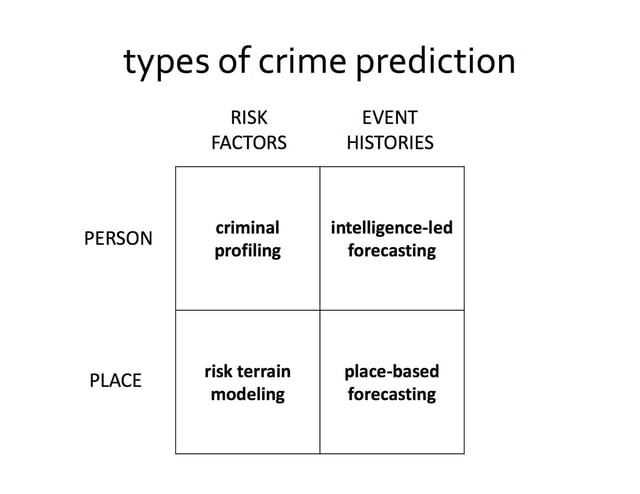 Criminal profiling is rife with civil liberties problems and it is right to raise serious concerns about predictive policing that follows this model.

Risk factors used to predict where and when a crime will occur is a part of so-called risk terrain modeling. Here, non-criminal attributes of individuals, groups and places are analyzed in space and time to try to identify which places are at greatest risk of a crime occurring and when.  Though, perhaps subject to fewer civil liberties concerns because of the focus on place rather than person, a key challenge here is whether the correlations that underlie the model of risk are actually causal.

While we know that poverty is correlated with crime, there is limited agreement, let alone proof, of what drives the correlation.  If the correlation breaks it is difficult to figure out why, and more importantly, how it will impact predictions.

Using event histories to predict who will commit a crime might be termed intelligence-led prediction.  This is a much narrower idea than intelligence-led policing, which generally seeks to ingest as much information about individuals and police their explicit behavioral patterns.

Intelligence-led prediction is meant to refer to the idea of using only the past offending patterns of an individual to predict if and when they will likely commit a crime in the future. There is ample evidence to suggest that offending history follows regular trajectories, and seeking to intervene with individuals, given knowledge of their offending history, is a well-established practice.  Such methods have been used as part of the parole decision making process in some places.  However, acting on a prediction that someone might commit a crime does raise significant legal and ethical concerns.

Finally, using event histories to predict where and when a crime may occur is termed placed-based predictive policing.  Here the history of crimes occurring in a place provide a record of how crime hotspots emerge, spread and dissipate.  Understanding these dynamics allows one to predict how those hotspots will evolve in the near future and where crimes are most likely to occur.  The focus is on place and NOT people, and uses recorded crimes, NOT assumptions about how different individual, social or environmental risk factors drive crime.

PredPol operates strictly in the place-based predictive policing domain. Event histories are assembled from crimes known to the police, specifically information on what type of crime occurred, where it occurred and when. No information on victims or suspects, nor measures of the characteristics of communities and environments, are used in predictions. This data is sufficient to identify a limited number of 500 x 500 foot regions where crimes are likely to occur in a window of time lasting anywhere from 6 to 12 hours. PredPol predictions typically predict two-times as much crime as traditional hotspot modeling, which relies on static crime locations and does not take into account the dynamic nature of crime. Police use these predictions as part of their routine patrol practice, visiting predicted crime places when they have available patrol time. 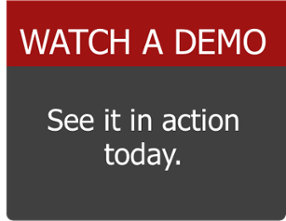